As I had mentioned in the Tech Support and Refund Scams post, many of these scams start with an email claiming to be from e legitimate company. This morning I had several emails from ‘Billing Team’ in my junk folder. Here is one of them below (click the image for full-size). Note: the formatting including highlights is how the email appeared and were not added by me). 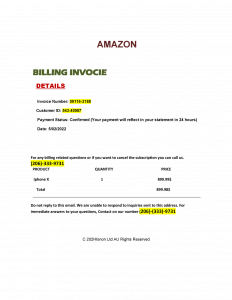 Besides ending up in my junk folder there were several things I noticed within a few seconds to indicate this was fake and a scam:

I’ll give these scammers some credit, they did put some effort into the template by having a Seattle, WA phone number to go along with the fake AMAZON header. Using the name of a business which does sell on Amazon (though not this type of product) was an interesting touch. Looking at the real emails I get from Amazon they all say ‘This email was sent from a notification-only email address that cannot accept incoming email. Please do not reply to this message.’ There is no link or phone number provided in the ‘real’ email from amazon (which always come from an amazon.com address NOT a GMAIL.COM.

Sadly, people who don’t know what to look for are going to see this email and think they’ve been charged $900 by Amazon for an iPhone they didn’t order. They’ll call the number (which I am sure re-routes to India) and fall into the scammers trap then hours later would be out more than just $900. Again as mentioned in the previous post these scammers are going after the older population and those who are less tech savvy. They don’t know what a real Amazon email looks like or the correct stylization of ‘iPhone’ or even the correct price. They don’t know to pay attention to (or look at) the return address.

Save
Tagged as: Amazon Scam