Announced back in 2017, Volkswagen has released in Europe the long awaited electric version of the classic VW Type 2 or Bus. A US version will be released sometime in 2023. The primary (and at this time known) differences between the European and US versions of the Volkswagen ID. Buzz Microbus are primarily the wheelbase length and seating configuration. The European version is more of compact SUV with two rows of passenger seating and a (small) cargo area in the rear. The US version will be more like the original Type 2 or Bus with a longer wheel base allowing a third row of passenger seating. As far as price, range and length of the US version, Volkswagen has yet to release those details. 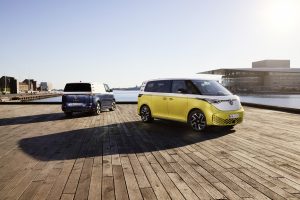 It is nice to see Volkswagen not going radical with the body design. While it is an updated design, it still looks very similar to the classic from the 60;s and 70’s. I find too many time automakers try to make their EV’s ‘futuristic’ looking and they end just looking weird and fugly. That was one thing I liked about Tesla was they looked like a regular car without the odd extra panels on the door below the windows or creating a 5-door hatchback. Even the interior things are kept neat and simple. The ‘Dash Cluster’ is mounted on top of the steering column and of course the standard EV infotainment system touch screen. 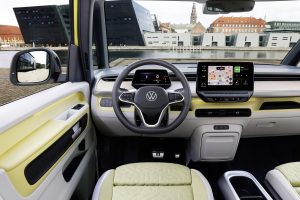 There are more in-depth details and plenty more pictures (at this time only for the European Model) on Volkswagen’s Media Site.

Save
Tagged as: ID. Buzz, Volkswagen