In December 2012 I bought an Asus Nexus 7 tablet. This was the 2012 Wi-Fi only model as they did come out with a cellular version later on in 2013. I had used the tablet for school, community service project as well as for looking up information at home from the comfort of my couch. Everything was going great, that was until Google pushed out Lollipop (Android 5.x) late in 2014 and my tablet became a very expensive paperweight. It was sluggish and would freeze randomly. Oddly enough, it worked fairly well when I was using it as in car GPS with Google Maps this past spring. Well, except for the issue that it was draining the battery quicker than it could recharge (or it could’ve been the car charger I was using).

After doing some quick searching on Google, I found out I was not the only one disappointed with the performance with Lollipop on the 2012 Nexus 7. I had found some tweaks that let me go in as a developer and disable some the animations and while it did help some, the tablet still froze and lagged. I had read accounts of many people reinstalling KitKat (Android 4.4.4) with great success. This was one of those things that has been on my to-do list for a while now. Since I wanted to get this done before I went back to school next month, I took sometime out earlier this week to get this done. I would say it took about a couple hours from downloading the needed software, install Android 4.4.4 and root the tablet (more on this later). It did take me two attempts to install Android 4.4.4 as I mistakenly downloaded and tried to install the version for the cellular Nexus 7. This resulted in the tablet being stuck in the bootloader, but was easily resolved by restarting the install process with the correct version of the software.

Some things to keep in mind before you do this:

I found these directions by Josh Smith on Gotta Be Mobile fairly easy to follow. Here are some tips:

You do not have to root your device if you don’t want to. Rooting the device allows you to run non-Google software and make further customizations to your device.  The main reason I recommend rooting the device in this case is to be able to use the DisableService App to disable the system notification to install Lollipop. You can not remove the update notice once it prompts you and there is a chance you could accidentally install the Lollipop update.

Rooting was fairly simple and does not wipe your personal data. I used Nexus Root Toolkit v2.0.5. You will need to re-enable Developer Mode on your device as well as USB Debugging before you can root your device. Upon running the app you will see a screen similar to the one below. Note: If you have already reinstalled Android 4.4.4, the Bootloader is still unlocked and therefore you do not need to Unlock.  Important: Make sure Custom Recovery is NOT checked below Root. Click Root and follow the prompts. 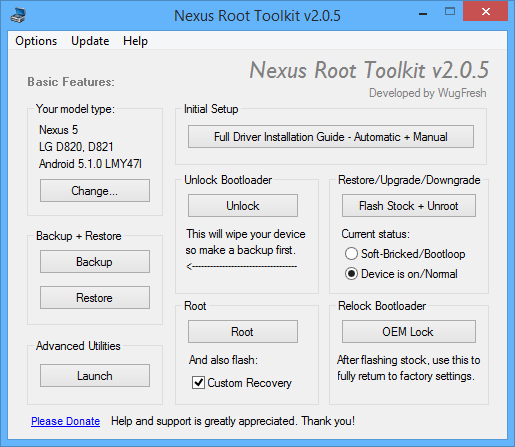 The Nexus Root Toolkit will install on your device SuperSU and BusyBox Installer. SuperSU lets you grant root privilege on-demand to any app that requests it. After you have rooted your device you will want to install on your Device (via the Google Play Store) DisableService app. Once you have installed the DisableService app and upon first run, you should get pop-up from SuperSU letting you know that DisableService is requesting full access. Tap Grant to continue. There are two place where the System Update Service need to be disabled:

Once you have disabled the SystemUpdate service, you will no longer be bugged about the newer version of Android. Note: this does not affect the updates for your apps, those will still continue.

That’s all there is to it! You now have KitKat again and a working device. If you rooted your device and disabled the System Update Service there is no risk that you will accidently reinstall Lollipop. Take a look at the cool stuff you do with your rooted device.

Any cookies that may not be particularly necessary for the website to function and is used specifically to collect user personal data via analytics, ads, other embedded contents are termed as non-necessary cookies. It is mandatory to procure user consent prior to running these cookies on your website.