Back in my day when we want to buy software we had to go to a ‘brick-and-mortar’ store to purchase a physical copy of the software on floppy disks; then lug it back home and spend the rest of the day installing said software. Around 30-years ago Microsoft released C/C++ Compiler version 7.0 which holds the record for Microsoft’s ‘biggest’ (in terms of both size and weight) software release.

The retail presentation box (yes the software and paper manuals were inside a box on the retailer’s shelf) which came in around 40 to 44 pounds and almost 2-feet tall contained: 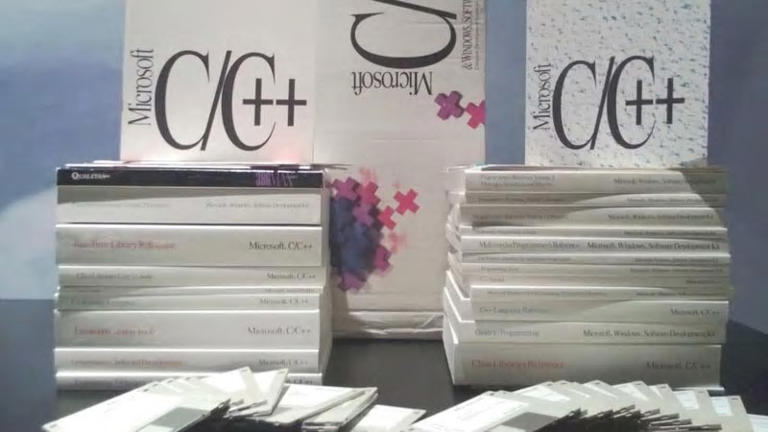 Given this was 1992 and DS/HD (Double Sided/High Density) floppies were standard with a capacity of 1.44 MB each this means the program was around a whooping 36 MB (also assuming there was no file compression). That was a lot of disk space in that time when the average hard drive was maybe 100 MB and Windows 3.1 took up about 8 MB of space. Installation had to been a nightmare (though not as bad as could’ve been had it been released on 5.25 inch double-sided floppies) with having to constantly eject the current disk and insert the next disk (plus floppy drives were very slow compared to HDD or SSD). A few years later when CD-ROM’s became more widely used in software distribution all those floppies could have been replaced by a single CD-ROM disc. Installation would have been much quicker too having only one disc to install from. Today, a download of software of this size would be nearly instantaneous!