Yet another ‘if it sounds too good to be true’ deal (such as the Free Microsoft Office Professional Plus in the UK). This time around we have a 30 TB ‘Portable SSD’ for the incredible low price of $39 USD. First red flag besides being unbranded is the $39 price. If this were real you would be spending around $4000 USD for that amount of space. This ‘deal’ appeared on AliExpress as well as WalMart.com (third-party seller). 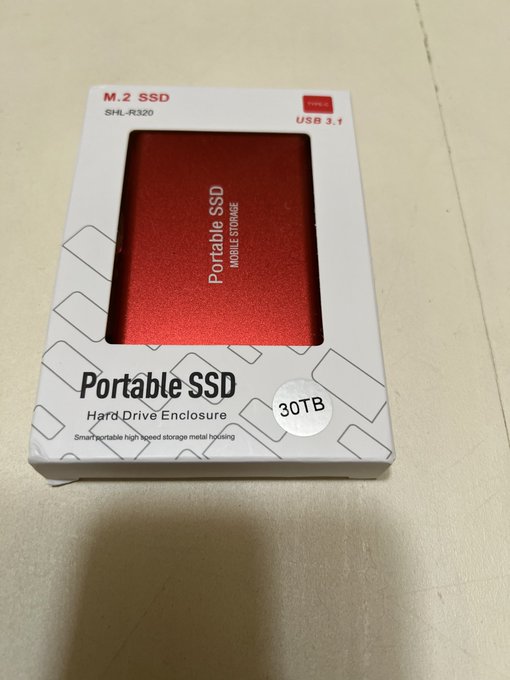 Twitter user @RayRedacted (Ray) opted to purchase this ‘deal’ just out curiosity to see if this was indeed too good to be true. Spoiler Alert: It is. In one of the photos Ray posted on Twitter we clearly see a ’30 TB’ sticker affixed to the bottom right of the packaging. When Ray plugged the drive into his PC (hopefully an off-network ‘burner’ PC), Windows detected two 15 TB Virtual Drives, however they were operating at USB 2.0 speed (480 Mbps) not the more modern USB 3.1 speed (10 Gbps). Furthermore, the drive could be written to, but no data could be retrieved. In the end Ray cracked the drive open and found two 512 MB Micro SD cards. For those not familiar, Micro DC cards are commonly used to expand the storage system of smartphones, drones, gaming devices and cameras. The Micro SD cards were glued into place on an adapter circuit board. So instead of being a 30 TB SSD, this turned out to be 1 GB drive which likely also contained some nasty malware or Ransomware (which is why for Ray’s sake I sure hope he tested this drive on a junk machine not connect to a network).

I am not sure what the total cost would have been to create this fake drive. The 512 MB Micro SD cards are $5 each, but have no clue what the circuit board or even the fancy casing (which does look very similar to this Samsung drive) would cost. Plus there is the retail packing and of course those ’30 TB’ stickers. Finally, there are the listing fees and commissions for the eCommerce sites these were being sold. My guess is the scammers were very likely taking a loss on the drive itself. However, if there is Ransomware on the drive (which I am sure there is) that is where the scammers are making their money. One paid out ‘ransom’ could easily cover their entire costs.

In my research I found on eBay a 480 GB SanDisk SSD for $40 which also sells on Walmart (not a 3rd party seller) for $63. I also noticed many questionable products being offered on AlExpress including the same ’30 TB’ drive in multiple colors branded as Xiaomi for $30. Xiaomi Corporation is a Chinese designer and manufacturer of consumer electronics and related software, home appliances, and household items. Looking at their site they sell a wide variety of products including phones, monitors, cameras, lightbulbs, scooters. However, absent for their product list on their site were any type of SSD.

TL;DR if you are shopping for portable SSD you are not going to find a real 30TB USB 3.1 drive for $40 USD. Furthermore if you are shopping for one on Walmart.com it is best to only buy products which are SOLD and SHIPPED by Walmart. These are likely going to be more reputable products, plus you can return the product to any Walmart store (with 3rd party sellers typically you need to ship the product back to them, at many times at your own expense).